just four days until my odyssey begins and already there have been changes one couldn't foresee. my first stop was going to be cancun - i was going to visit the mayan temple, chichen itza, before catching a flight to the island that shall remain nameless, a friend went last week and informed me that no tickets were available until mid to late january. shoot.
so i've just purchased a ticket to jamaica instead. from there i will see if it is possible to get to the island, but i am not going to do anything crazy to make it happen. if it doesn't work out, i will head to guyana and see about busing my way to rio where i will meet up with my friend v, an intrepid adventurer who is game for trying out my fly-by-the-seat-of-my-pants travel style.
i had hoped to be all caught up on old adventures before i began writing about this one, but it seems that is no where near happening. life has a way of forcing you away from the stuff you want to do and making you do the things you'd rather not.
so i warn you now, there will be some going backwards and forwards and to help keep it clear, i will try to toss in a year now and then, as well as keep all current posts titled in lower case and old adventures in capitals.
hope you will stick with me!
and between now and the next post, let me wish you all a very merry holiday!

pilfered tidings is one of my collage cards, available through my website, www.5036.com

just watched 180° South and this was my favorite line from the movie about two inspiring adventures:

"the whole purpose of climbing something like that [everest] is to effect some sort of spiritual and physical gain. if you compromise that process [hiring sherpas to do the work for you], you are an asshole starting out and you're an asshole when you get back"
~ yvon chouinard (founder of patagonia clothing)

galway, ireland to cork, ireland
i stayed in a hostel in galway one night before heading off to my next destination. while checking in, i met a fellow californian. we got to chatting about home and found we had similar political views - loved our country, but didn't care for the lack of consideration/respect of others. when we walked into the dorm room that we would be sharing with 16 others, it was only about five, so as we got settled in we talked about going and scrounging up some food.
there was a huge canadian flag covering one of the bunks (a privacy barrier), and i found i couldn't help myself - i started mocking the canadian traveler's need to make sure they didn't get mistook for american, putting those maple leaves on every available surface. i said some outrageous stuff that i didn't believe at all, like canada was really just the 51st state, mainly to make my new friend laugh. we were being loud and having a great time, but then someone behind the flag groaned a little, and we realized we had disturbed their sleep. we slipped out of the room so as not to further annoy them.
in hostels you get folks from all over who sleep at irregular times depending on where they've just come from and what they'd been doing there. i hated when other hostelers would come in drunk and loud, with no regard for the people trying to sleep, and was abashed that i had just done that - granted it was still light out and they had hidden themselves behind the flag, but still, i felt bad.

the next morning, as i got myself ready to bus down to dingle, i noticed the canadian was already gone. 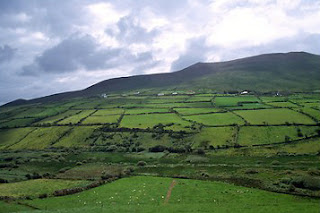 dingle was stunning. the name sounds silly, but the place is just absolutely beautiful. so green. that shade of kelly that seems just a wee bit too bright for nature. rolling hills, super narrow roads, quaint little village, and a lovely hostel that used to be a manor house.
it was divine.

the first night at the hostel, i met the staff and the only other guest, a canadian gal, k. we made dinner together and talked long into the night. at one point, which often happens to me, we fell into a political conversation. i can't stress enough how much i love my country, but i am also deeply respectful of other cultures and i think assimilation is a terrible thing.
k seemed to get where i was coming from and liked what i was saying, and then started telling an 'ugly american' story. seems she had been in a hostel, sleeping and these two loud americans had come in and woken her up with their obnoxious pro-america blather, dissing canadians -
uh oh.
i asked if she had been in galway the night before.
'yes, how did you know?'
i somewhat shamefacedly admitted that that had been me and quickly pointed out that i had been kidding, which now that she knew me a little, she could see.
even though we all got a big laugh out of it, i was mortified and decided that i would try to mind my tongue a little closer going forward. jokes out of context can be very bad news!

dingle was amazing, and life was so fine just then, i ended up staying for days, giving up a couple nights in blarney to do so. i hung out with fungi, a local dingle citizen who happens to be a dolphin, went for long rambling hikes, the whole group of us would cook together and watch football on the telly, it was lovely. but eventually i knew i needed to head out.
when i did, k decided she would tag along with me for a little, and since we had completely gotten past my mockery, i was open to the company.
we just missed our morning bus to cork. there wouldn't be another one until the following day. we were told that hitch hiking was commonplace and completely safe; feeling brave because we numbered two, out the thumbs went. the first car that passed stopped to pick us up. it was a tiny battered little thing being driven by an eccentric millionaire sheep farmer, johnny dingle. he was very friendly and chatty, and said he could drive us as far as blarney and assured us we'd be able to hitch a ride from there onto cork. i, thankfully, was sitting in the backseat, so was able to ignore the fact that he drove like a demon.
i could see k's white knuckle grip and resolved not to look at the road - if i was going to die, i didn't want to see it coming. but there was no head on collision, seemed some sort of miracle!
he was really very nice, but i learned my lesson, no more hitch hiking for me. when we got out of the car, we both agreed that the bus (which we were now way ahead of, thanks to johnny's lead foot) was the way to proceed.

oh, and i did visit the blarney stone, but i didn't kiss it - i am already cursed with a gabby tongue, i didn't see any need to increase that!
Posted by Lecia at 10:02 AM No comments: